In reciprocating pumps, energy is added to the fluid intermittently by moving one or more boundaries linearly with a piston, plunger, or diaphragm in one or more fluid-containing volumes. If liquid is pumped during linear movement in one direction only then the pump is classified “single acting.” If the liquid is pumped during movement in both directions it is classified as “double acting.” 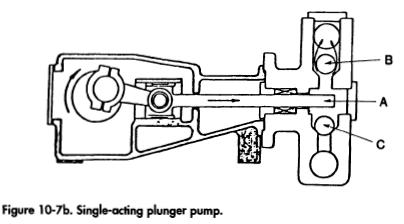 Reciprocating pumps are also classified by the number of cylinders they have. If the liquid is contained in one cylinder it is called a simplex pump, two cylinders a duplex, three cylinders a triplex, five cylinders a quintuplex, seven cylinders a septuplex, and so forth.

The head-flow-rate curve is a nearly straight vertical line. That is, no matter how high a head is required, the plunger will displace a given volume of liquid for each rotation. The flow rate through the pump can only be varied by changing the pump speed. A throttling valve that changes the system head-flow-rate curve will have no effect on the flow rate through the pump.

Since the pump will attempt to match whatever system pressure is required, it is necessary that a relief valve be installed on the pump discharge. This assures that the pump will not overpressure itself or the discharge pipe.
The advantages of reciprocating pumps are:
1. The efficiency is high regardless of changes in required head. Efficiencies on the order of 85% to 95% are common.
2. The efficiency remains high regardless of pump speed, although it tends to decrease slightly with increasing speed.
3. Reciprocating pumps run at much lower operating speeds than centrifugal pumps and thus are better suited for handling viscous fluids.
4. For a given speed the flow rate is constant regardless of head. The pump is limited only by the power of the prime mover and the strength of the pump parts.

Because of the nature of their construction, reciprocating pumps have the following disadvantages when compared to centrifugal pumps:
1. They have higher maintenance cost and lower availability because of the pulsating flow and large number of moving parts.
2. They are poorer at handling liquids containing solids that tend to erode valves and seats.
3. Because of the pulsating flow and pressure drop through the valves they require larger suction pressures (net positive suction head) at the suction flange to avoid cavitation.
4. They are heavier in weight and require more space.
5. Pulsating flow requires special attention to suction and discharge piping design to avoid both acoustical and mechanical vibrations.

In reciprocating pumps, the oscillating motion of the plungers creates disturbances (pulsations) that travel at the speed of sound from the pump cylinder to the piping system. These pulsations cause the pressure level of the system to fluctuate with respect to time. In order to lessen potentially damaging pulsations in piping from this pressure fluctuation, pulsation dampeners may be installed in the suction and/or discharge piping of the reciprocating pump. Pulsation dampeners are recommended for all major
multi-pump installations, unless computer analog studies indicate that they are not needed. There are basically four types of pulsation dampeners: liquid-filled, gas-liquid interface, gas-cushioned, and tuned acoustical filter.

Liquid-filled dampeners (Figure 10-8a) are large surge vessels located close to the pump. The volume of the vessel is normally ten times the pump throughput per minute. Liquid-filled dampeners are maintenance free and incur no pressure drop. They are heavy when filled with liquid, however, and they tend to require a lot of space.

A gas-liquid interface pulsation dampener (Figure 10-8b) consists of a vessel that is partially filled with liquid and partially filled with gas. This pulsation dampener is effective because the high compressibility of the gas absorbs the pressure pulses. Due to the compressibility of the gas, these dampeners are much smaller than liquid-filled dampeners. However, since the gas could be dissolved slowly in the liquid that is being pumped, the gas-liquid interface must be monitored. In addition, these dampeners are impractical at locations where pressures vary widely. 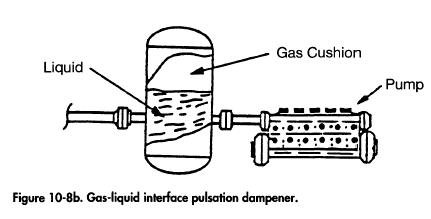 Gas-cushioned pulsation dampeners (Figure 10-8c) use a pressure bladder to keep gas from being absorbed in the liquid. These dampenersare generally small and inexpensive, but they cannot be used in applications where temperatures are above 300°F. In addition, like gas-liquid interface dampeners, these dampeners are impractical at locations where pressures vary greatly. 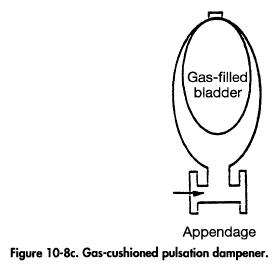 Tuned acoustical filters (Figures 10-8d and 10-8e) are generally of two types: Type I and Type II. In Type I, two liquid-filled dampeners are connected by a short section of small-diameter pipe called a choke tube; in Type II, the choke tube is installed between the one liquid-filled dampener and the piping system. Both dampening systems are best designed through the use of digital or analog simulation. Tuned acoustical filters can suppress pulsations at all frequencies. In addition, they incur low maintenance costs, and their performance is not affected by temperature. Still, these filters require ample space and are relatively expensive. They also require a pressure drop across the choke tube, thereby limiting applicability in low-NPSH situations. 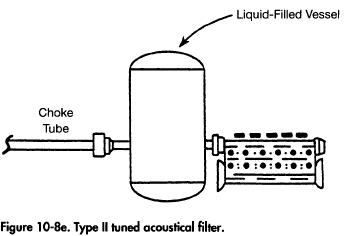 View all posts by Jack